Travis is a career chameleon. He’s moved from makeup artistry in the big city, to local politics, to leadership in the Alcohol and Other Drugs (AOD) sector. Throughout his journey, he’s always been driven to help others be the best they can be. And in the face of his own mortality, Travis saw his single, life-defining purpose: to help others discover theirs.

I feel heard by the organisation; they respect my skills and craft. We are all leaders in our own way, and I think Lives Lived Well really see that. The organisation actively helps you grow into the person and professional you seek to become 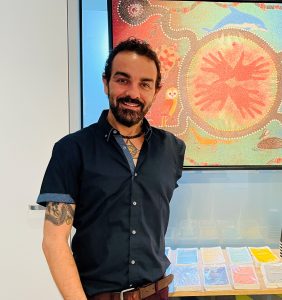 Living and working with purpose

Most people choose their job, but Travis feels his career chose him.

Soon after meeting Travis, you get a strong sense that there’s much more than meets the eye. An open smile, warm eyes and an infectious laugh draw you in. And when he starts sharing his story – so openly and without pretense – it’s clear he’s living out his purpose. He says what he means, and means what he says.

Travis believes everyone has a mission to fulfill. His belief in the power of the individual drives him – and it’s something he teaches his colleagues and clients too. Travis has progressed through a number of roles with us. Today, he wears the title of Team Leader for CREST and Alcohol and Other Drugs Services, based in Cairns. The role involves supporting his team to provide vital withdrawal, counselling and referral services for the community. It’s a busy position, but Travis is no stranger to hard work.

“I got my first job at eight, unpacking stock at a supermarket in Adelaide,” Travis laughed as he notes he hasn’t stopped working since.

From working as a guide in Kakadu National Park, to managing the Warradjan Cultural Centre, working in hair and makeup artistry in Sydney, and even becoming an elected member of council in Port Lincoln – Travis seems to have squeezed every drop of possibility out of life so far.

At 27, Travis was told he had three months to live. He had been diagnosed with Rhabdomyosarcoma, a rare form of cancer. In an effort to save his life, Travis made the decision to have his left arm amputated. Twenty years on, and Travis is still with us.

Looking back, Travis says they were dark times. But he shares that coming close to death was, in fact, the best thing that ever happened to him.

“It shifted my mindset to an entirely new perspective on the world and on myself. It made me question how I choose to show up in the world, particularly around integrity and my purpose.”

Are you passionate about the possibilities?
Explore our careers page for opportunities at Lives Lived Well.

A different kind of backpacker

After spending most of his working life in hospitality and service-based roles, Travis realised his love for listening to people and hearing their stories.

“My decision to pursue mental health wasn’t necessarily triggered by my own personal life journey. In truth, I just love listening to people’s stories. Not rushing to provide answers… but just to listen.”

Looking to pursue a career in mental health, Travis switched his title from Makeup Artist to Counsellor at Port Lincoln Aboriginal Health Services – while also becoming an elected member of the Port Lincoln Council. Then, after six years working in Mental Health in the Alcohol and Other Drugs space, Travis came across an opportunity that combined outreach and travel at Lives Lived Well in Queensland.

“I started in a travelling role in Central Queensland. My backpack was my office. I was on the road every week. Eventually I stepped up as a Team Leader, but I soon decided to go back to outreach across Queensland again.”

A life worth living

Four years on, Travis said he feels his values truly align with ours at Lives Lived Well.

“I feel heard by the organisation; they respect my skills and craft. We are all leaders in our own way, and I think Lives Lived Well really sees that. The organisation actively helps you grow into the person and professional you seek to become.”

Supporting a team working hard to provide essential services to the community, Travis takes pride in ‘leading from behind’ and allowing people to develop their unique skills.

“It is about ‘we’ not ‘I’. I, alone, can’t provide the structure we need for critical services. We need to work towards our shared vision as a collective. Fostering a culture of self-care is vital for us to provide the best support to our clients.”

And Travis’s advice to anyone beginning a career in mental health?

“Remember – you are good enough, so just go for it! The rest will come – you’ll be supported to learn as you go.”

Are you passionate about a career in Mental Health services?
Head to our careers page for the latest opportunities at Lives Lived Well.