The young leader with an old soul

Grace is proof you should never stop challenging yourself. She shares her journey from being a Mental Health Counsellor in Longreach as a dedicated Team Leader, working to reduce the stigma around recovery.

Lives Lived Well is my family. I always feel so accepted, loved and cherished. They want to build me into whatever I want to be and give me the tools and resources to do that 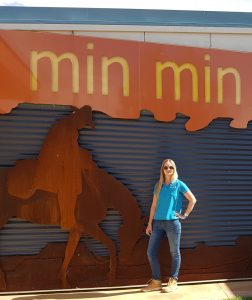 A young heart, an old soul

Grace says her career path was always meant to be.

“I was destined to be either a nurse or a social worker. Mum was a Registered Nurse. But I love the talking part of social work… and hearing people’s stories. So I’m pleased I’ve ended up where I have.”

When Grace speaks, her words come from a place of vast experience and deep empathy. Delving into her past, you can see why.

“I grew up with older parents, and there was an entire generation between me and my siblings. So I had to grow up pretty quickly. I think that’s where my sense of self as an ‘old soul’ came from,” Grace explains.

After her mother suffered a serious work accident, Grace found herself caring for her mother and supporting her father too. As a carer, Grace discovered an even deeper level of compassion, empathy and patience.

Forging her own path

Following in her mother’s footsteps, Grace began working as a Nursing Assistant in aged care. There, she quickly realised she was especially drawn to one aspect of her role.

“Listening to the stories of the residents really touched me. It was eye-opening to hear where their lives had taken them, and the challenges they encountered. I could see that those hurdles shaped the person they became.”

Despite a real appreciation for the work and the residents, Grace decided to switch healthcare for social work.

“I didn’t think nursing was for me – and I was really keen to explore the impact social work has on our world.”

Are you passionate about the possibilities?
Explore our careers page for opportunities at Lives Lived Well.

Building a legacy ‘out west’

Several years later, with a Bachelor’s degree in hand, Grace packed her bags and headed out west to Longreach to work as a Counsellor. The challenges of living in such an isolated community were not lost on her, but she looks back on her four years there with warmth.

“I stuck it out. To be honest, it had a lot to do with the clients. They’d ask me, ‘When are you leaving?’, almost as if they expected people to move on quickly. I didn’t want to be that person.”

Before joining Lives Lived Well, Grace had never seriously considered working in Alcohol and Other Drugs (AOD). But after some time as a Social Worker, she was ready for her next move and was curious about the field. When she made the decision to join us, she found it was the perfect fit.

“I loved it – from the moment my manager gave me a go. He offered me a chance, and I’m so glad he did. I honestly can’t see myself doing anything else now.”

As a bright-eyed graduate Social Worker, Grace was tasked with building our Longreach office from the ground up. She sees that as one of her greatest achievements, and says the experience helped shape her into the leader she is today.

A new adventure in the east

Grace brings compassion, soul and drive to her role as Team Leader for our Caboolture and Sunshine Coast services. There, she works with her team to help educate people and minimise the stigma around those in recovery.

What keeps her going is the chance to work with her team to build their capacity and reignite their passion. And we’re proud that this comes back to her own experiences with us.

“Lives Lived Well is my family. I always feel so accepted, loved and cherished. They want to build me into whatever I want to be and give me the tools and resources to do that,” she says proudly.

Grace has a single piece of advice for someone looking to start a career in social work:

“Be brave and try something new. You never know what you could achieve.”

Are you curious about a career in Social Work?
Head to our careers page for the latest opportunities at Lives Lived Well.